Turning the Toxic into the Tonic

"What's sad is that people claim that poor Black communities need policing the most - to protect them. But this is not quite true. Capitalists need policing the most - to protect their property, billions, businesses and borders by arresting the people whom they've exploited, excluded and extracted from the most." - Derecka Purnell, Becoming Abolitionists (2021)

We woke up on the last Friday in June to find the red robin's nest removed from where it was resting underneath the roof of our back deck. When we went to bed the night before, three baby birdies were chirping. Now it was silent. It was a sign. The predator showed up just a few hours before the Supreme Court overturned Roe v. Wade.

We joined a mass of mad people marching in downtown Detroit later that day. The stories and statistics have been spilling out on social media ever since. About the 10-year old girl who was raped in Ohio but had to drive to Indiana to get treated. About how husbands and boyfriends use pregnancy to control the physical and social lives of women. About how Black women are three times more likely than white women to die during childbirth. 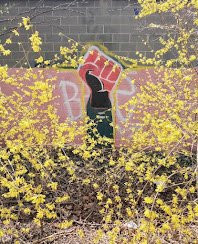 "...working to capacity is a luxury only the unintentional can afford, and the unintentional are those who do not wish to guide their own destinies." - Audre Lorde
It’s been another long pandemic winter. Here in Detroit, the temperature finally rose above sixty for five consecutive days. The Maple tree just outside the kitchen window is shimmering green leaves! We wake up every morning to the songs of red-winged blackbirds and robbins. The butterflies and dragonflies are dancing. The dandelions yellow the landscape all over the city. We’ve been taking late afternoon walks through Woodbridge, where we moved into a little condo four months ago.
This racially diverse neighborhood is a collection of century-old Victorian homes a dozen or so blocks from the campus of Wayne State University. This little 2-bed, 2-bath condo is our first ever home purchase, a privilege of inter-generational wealth. We are grateful for the frugality of our fathers and the willingness of Tom's mother to be a co-signer! We are loving that Spring is offering us more chances to tread softly in this neighborhood as guests - and learn what it means to throw in with this city once again.
Read more »
at May 15, 2022 No comments:

The Sound of the Genuine 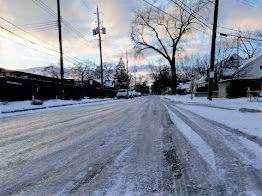 If you cannot hear the sound of the genuine in you, you will all of your life spend your days on the ends of strings that somebody else pulls.—Howard Thurman
A couple months ago, we were circled up around the fire with some friends in Detroit. A couple teachers, a couple therapists, a couple writers, an engineer. We were sharing our struggles with what one of us called “depression.” Heads nodded. We were folks who feel like we are actively engaged with what is happening in the world, tracking the latest wreckage wrought by covid and counterfeit notions of race, class and gender. We listened and resonated. We were a group of “successful” middle-class people whose souls were getting sunk by the sense that society is collapsing as our lives feel powerless and less fulfilling than we expected them to be by the time we got to our 30’s and 40’s.
Read more »
at January 28, 2022 No comments: 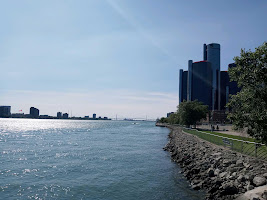 “The nation as it is currently constituted has never dealt with a yesterday or tomorrow where we were radically honest, generous, and tender with each other.”—Kiese Laymon
Over the past couple of months, our ministry of migration got slowed to a halt. The delta variant laid Tom up after catching it on a flight from Central Oregon to Orange County in mid-August. It was a rough five days, followed by a few weeks of fatigue. Tom was fully vaccinated in mid-May. In the last month of summer, these breakthrough cases seemed to sprout up everywhere. To add insult to injury, a few days into September, Lindsay was stung by a bee and her leg was swelled up for more than a week. She kept it elevated, Benedryled and on a rigorous icing schedule.
Read more »
at October 03, 2021 No comments: 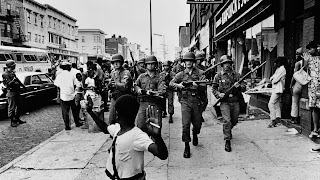 "Somewhere we must come to see that human progress never rolls in on the wheels of inevitability, it comes through the tireless efforts and the persistent work of dedicated individuals who are willing to be co-workers with God and without this hard work time itself becomes an ally of the primitive forces of social stagnation."--Rev. Dr. Martin Luther King, Jr.

Back in 1967, in the wake of anti-racist uprisings in Detroit, Chicago, Los Angeles and Newark, when Black folk (and a few allies) were mad-as-hell for good reason, the President of the US commissioned a congressional investigation. He wanted to know what happened, why it happened and what could be done to prevent it from happening again.

The ten white men and one white woman who wrote up the 426-page report dug to the roots of the so-called riots: lack of economic opportunity, failed social service programs, police brutality, white racism and the super-white perspective of the media. The report stated clearly:

White people wrote this! The Kerner Commission prescribed billions of tax dollars to be made available immediately—a massive government investment in jobs, education and housing for those Dr. King called “The Other America.”

"A cry is emitted whenever the throat is constricted or insufficient breath remains to form words, or else the anguish is so great that the words of the story are temporarily forgotten. The cry is nonetheless a sound, a residue of voice. It is the desperate desire to have a voice. And because soul denotes the inseparability of self from others, the world, and the Infinite, it bemoans not only the imminent demise of self, but that of the other, the world, and the Eternal. It is, in brief, an expression of existential grief, the anguished sigh of lost love.

It becomes crucial, then, that depression not be anesthetized or extinguished. Rather, we should listen to it. If it has been silenced by those who declare it a “disorder,” we are compelled to assist it in reclaiming its voice. And what if even the cry has ceased, or the sigh is no longer discernible? Might there be a form of depression, especially in societies demanding cheerfulness and compliant productivity, that no longer exhibits the expected mood?"—Dr. Bruce Rogers-Vaughn in “Blessed are Those Who Mourn: Depression as Political Resistance”

We honor our friend and elder Bruce Rogers-Vaughn who is retiring from Vanderbilt Divinity School in Nashville this month. He wrote an amazing book a few years ago called Caring for Souls in a Neoliberal Age. In it, he writes about being a psychotherapist for the past thirty+ years and bearing witness to major differences in the way clients are navigating the world now compared to the 1990's. One aspect is a deep-seated depression that so many of us are experiencing. Family, economic, social, political and religious systems are more disorganized, dysfunctional and destructive than ever. And our souls are paying a heavy price for it.

A Ministry of Migration 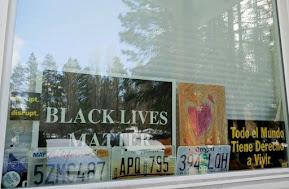 There’s a thread you follow. It goes among things that change. But it doesn’t change. People wonder about what you are pursuing. You have to explain about the thread. But it is hard for others to see. While you hold it you can’t get lost. Tragedies happen; people get hurt or die; and you suffer and get old. Nothing you do can stop time’s unfolding. You don’t ever let go of the thread.
William Stafford, "The Way It Is"
We have come to that place, yet again, where two roads diverge. After discerning with wise elders and kindreds, we have decided to shutter our home base in Central Oregon and, at least for a time, shelve the idea of a "home base" altogether. More and more, home base for us (and for our particular vocation) feels less like a place and more like a posture that pivots between the pain of solidarity and the promise of possibility. Not so much a hub, but a network. We keep hearing the call to light the hearth of home in our hearts and with kindreds scattered across the continent. To re-place a permanent address with an unfolding pilgrimage, scattered with multiple home bases.
Read more »
at March 08, 2021 4 comments:

Turning the Toxic into the Tonic

"What's sad is that people claim that poor Black communities need policing the most - to protect them. But this is not quite true. ...

We are a community-supported non-profit, partnering with families and faith communities to equip and accompany all those whose hearts burn for intimacy, community and justice.
The work of Kardia Kaiomenē is soul accompaniment—nurturing souls, strengthening communities and amplifying hope. 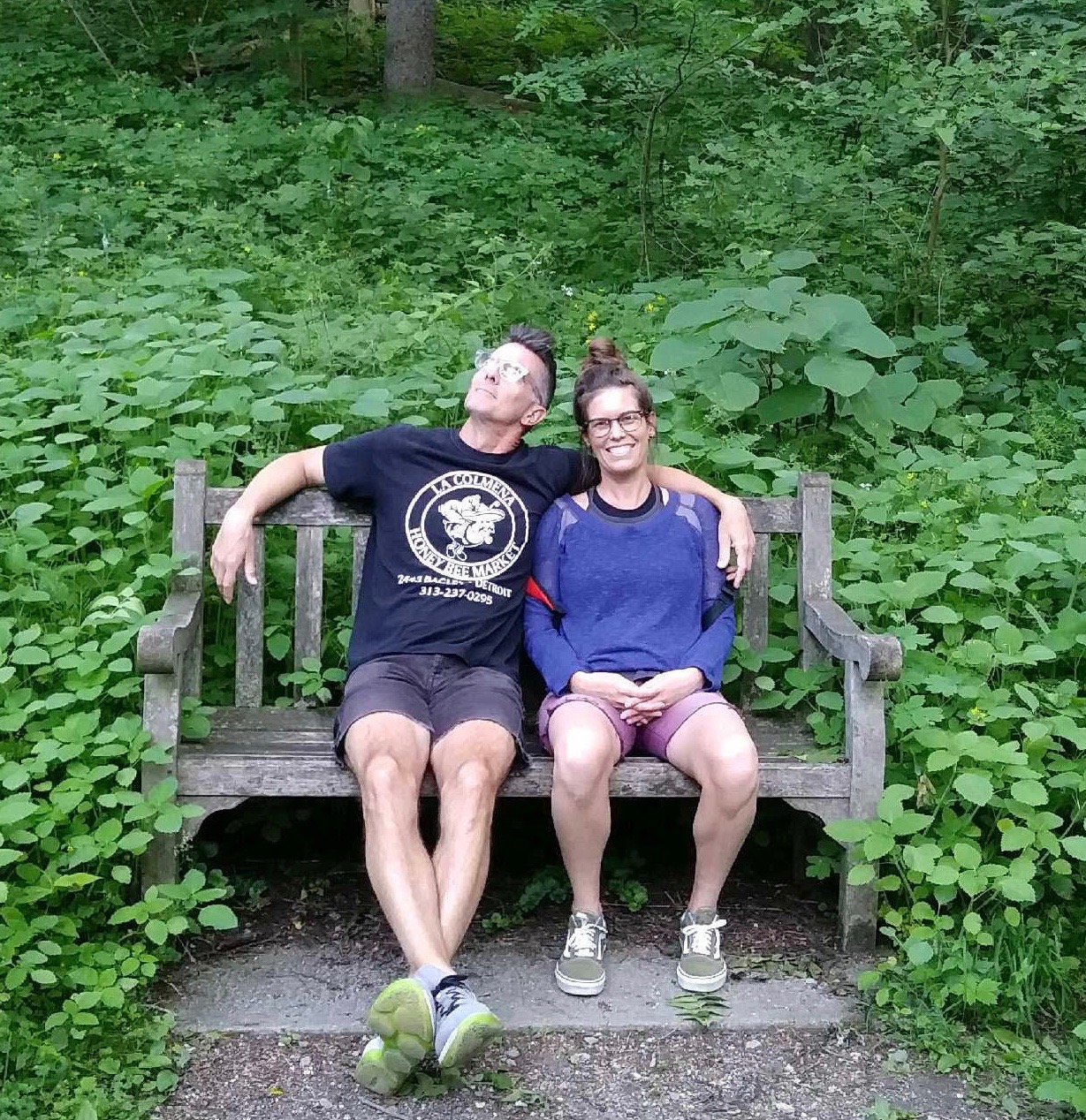 She is a licensed marriage and family therapist and he is a pastor and author. They were born and raised on stolen, unceded Acjachemen land first named Panhe (“South Orange County, California”) and were transformed by the thin place the Potawatomie, Ojibwe, Huron and Odawa call Wawiiatanong (“Detroit, Michigan”). They are on a pivoting pilgrimage, seeding sacred spaces all over Turtle Island ("North America).